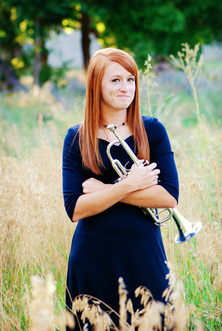 Mckenzie is in her 11th year of playing the trumpet.  She is currently attending Utah Valley University on a trumpet performance scholarship.  She is a member of the Wind Symphony and Symphony Orchestra at the university.  McKenzie graduated from American Fork High School in 2012.  While at American Fork High School she was honored to be awarded the John Phillips Sousa Award and the Outstanding Brass Award for two years as well as the trumpet section leader in the AF Marching Band for two years.  McKenzie was a member of the Wind Symphony for 3 years.  She also was first chair in the Alpine School District Honor Band in 2012 and was selected for the Utah All State band in 2011 and 2012.  McKenzie was an assistant in the Elementary Band program for two years and taught beginning trumpet lessons.  McKenzie is majoring Radiology and enjoys biking, Lego’s and attending BYU football and basketball games.