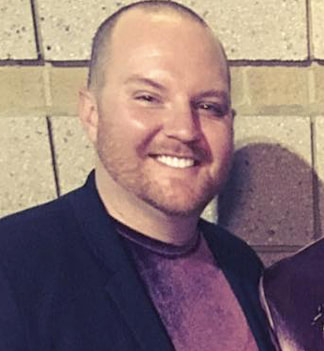 Jaycee Wilson comes from California’s Central Valley, and is now located in Salt Lake County, Utah. Jaycee began his marching arts career playing the clarinet in elementary school, which he still plays today. Jaycee found his passion for color guard while attending Clovis High School in 2004, and since then has marched with the Blue Devils Drum & Bugle Corps Color Guard from 2006 to 2010, Rhapsody Independent from 2005, 2007 to 2008, and Imbue Winterguard from 2009 to 2013.

Jaycee served as the Assistant Caption Head and Lead Technician at Bluecoats Drum & Bugle Corps from 2014 to 2017, and has designed for many other programs across the United States such as Clovis West HS, Clovis North HS, and American Fork HS.

Currently, Jaycee is the Color Guard Caption Head and Choreographer for the Blue Knights Drum & Bugle Corps since 2019, Staging/Drill Designer, Choreographer, and Instructor for Imbue Winterguard since 2010, Staging/Drill Designer for American Fork Winter Guard since
2015, and Staging/Drill Designer for Wasatch Independent since 2015. He has also been adjudicating in the color guard and visual captions primarily in the WBA marching band circuit in California, as well as the CVGPC and SJVCGPR circuits in percussion visual. Jaycee also
stages and writes drill for several marching bands in the fall season, primarily in California.

Jaycee is looking forward to working with the staff and students of American Fork on a regular basis and can’t wait to start his new journey with the AF family.